Who's got an Emmy? 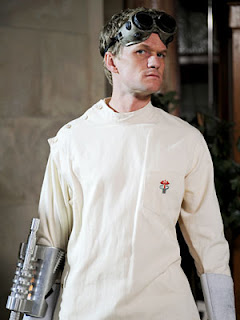 Doctor Horrible has an Emmy. That’s right, the critically acclaimed Dr. Horrible’s Sing-Along Blog has finally gotten the recognition that it deserves and not even Kanye West can steal its thunder. Joss Whedon’s mini web series/movie won Outstanding Special Class- Short Format Live-Action Entertainment Program. I know it’s a really specific and oddly named category, but I think it means anything that’s produced specifically for the internet so think of web series like the Guild. To continue the momentum, Neil Patrick Harris (Dr. Horrible) will be hosting the Emmys this Sunday (9/20/09) and he will no doubt plug Dr. Horrible’s Sing-Along Blog like he did at Spike TV’s Video Game Award show. Neil Patrick Harris is also up for a few more Emmys with How I Met Your Mother nominated for best comedy series and NPH being nominated for best supporting actor. So what’s left after you’ve taken over the world and won an Emmy....perhaps an adventure in space?