It’s been all over the news that Marvel was sold to Disney for 4 billion dollars (now that’s some change). Honestly, I don’t know how to feel about the whole deal. Here’s how I see it, on the one hand, Disney is a HUGE corporation and just on principle I hate HUGE corporations. So when I see the already massive Disney swallowing up more companies faster than Fat Princess can eat pies, I can’t help but get upset. On the other hand I don’t necessarily hate all of Disney, just the marketing department for the teenage angsty parts like Hanna Montana and the Jonas Brothers. 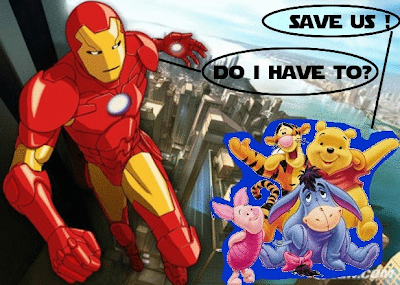 According to all the Market Analysts this was a smart move for Marvel since Marvel’s stocks will go up and their budgets for producing comic books will be much bigger, but I’ll ask, is it worth it? Marvel never seemed to be strapped for cash and even though both Disney and Marvel swear that Marvel won’t change I just don’t buy it. In any merger or acquisition things get changed, that’s just how it works. People get shuffled around and the corporate hierarchy gets scrambled then re-arranged. So even though they are keeping Marvel CEO Ike Perlmutter to make sure the comics we love all stays the same, Marvel will undoubtably change.

Now I hardly doubt that Marvel is going to do something stupid like feature Winnie the Pooh in the next issue of the Avengers, but I wouldn’t put it past someone trying to be cute or clever sticking a Disney character into an issue just because they can. Right now, I feel that Marvel’s sale will only impact the people who work at Marvel and the consumers 15 or 20 years down the line after a lot of the current staff is replaced with fresh blood that now have bosses who strongly suggest that they use some of that Disney magic we all hear about. But hey I could be wrong, it worked out for Kingdom Hearts so who’s to say it won’t work again.