Its been a long time coming, but I’m finally reviewing Kingdom Hearts Re:Chain of Memories (CoM) for the Playstation 2. As you may know, the Kingdom Hearts (KH) franchise fuses Disney with Final Fantasy in such a way that it creates a completely weird and very interesting world to explore. You might be wondering, “Hey didn’t that game come out for the Game Boy Advance (GBA) like four years ago?” Yes, Yes it did and I can safely say that the PS2 version is exactly the same as its handheld counterpart with a few extras.

CoM takes place between the events of KH 1 and KH 2 so you could say it’s KH 1.5 and like most games that try to squeeze themselves between established titles, CoM’s plot has no real bearing on the main story. CoM begins with Sora, the spiky haired hero, looking for his friends Riku and Mickey. On his journey Sora and his traveling companions, Donald and Goofy, stumble upon an architect's worst nightmare called Castle Oblivion. 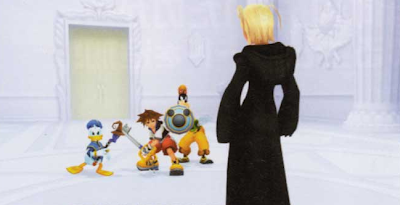 Inside the the castle, Sora meets members of Orginization XIII who inform him that his friends are lost somewhere inside the castle. In order to find his friends Sora must lose his memories so he can access all thirteen floors of Castle Oblivion. Sora must then weigh finding his friends against losing his most precious memories, as well as, unravel the secret behind Organization XIII and rescue a mysterious girl named Naminé.

CoM is technically a card battler, meaning you use playing cards to decide how you attack, but the game cleverly manages to disguise itself as a button mashing melee game. You are given a set number of cards that you can carry and depending on how you chose to level up Sora, you can increase the number of cards you can hold. Every card is assigned a value between 0-9; if your opponent attacks with a card valued at 7 then you must use a card with a higher value or zero to defeat their card, this is called a card break. 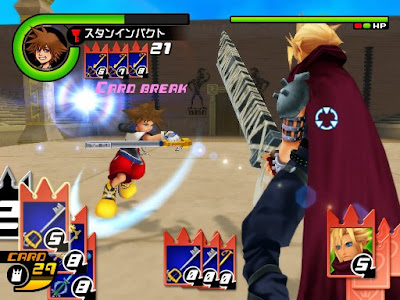 You can also combine up to 3 cards to create a number too large for an enemy to break or use the combination of cards to perform special attacks. There are three types of cards: magic cards that let you shoot lightning, ice, or fire, attack cards which let you strike your opponents, and summon cards that let you bring other characters like Simba onto the screen to attack for you. The trick to winning most of the battles is to get enough high level attack cards into your deck so you can mindlessly tap the X button and wail away on all the bad guys. Unfortunately, once you figure out the trick the game becomes a battle against tedium and some gamers might not have the patients or the desire to play all the way through to the end. Granted, there are some amazingly challenging boss fights that force you rethink your strategy, but those are few and far between.

The game takes place in all the same locals of KH1 such as Wonderland, Agrabah, Halloween Town, and Monstro’s belly, but the big downfall of CoM being ported to the PS2 is the level design. In the GBA version CoM was a top down 2-D romp through a maze of rooms with each room missing a wall so the player could see inside. In the PS2 version, you now have the ability to rotate the camera so when you do a 360 degree spin around a room, instead of seeing four walls, you see three walls and a black void where the fourth wall should be. 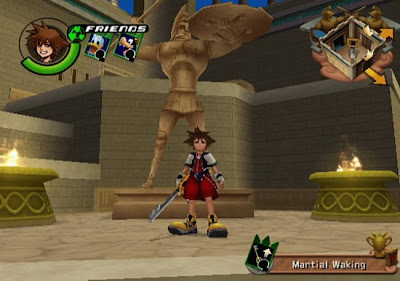 So why were the game designers so lazy that they didn’t add a fourth wall? Because in Japan CoM was a free game when you bought the remixed edition of Kingdom Hearts 2. If you think about it, why would the game designers spend extra money on making a lot of changes to a game that’s wouldn’t be gaining profit. It’s very upsetting to know that Square-Enix got away with selling a free game in Japan for $60 here in the U.S.

No original music here. The music features everything you heard from KH1, but that doesn’t mean it’s bad. This time around the cast from KH1 lend their voices to CoM in order to create a more in-depth experience. The cut scenes look great in fully 3-D graphics and some of the big boss battles made me want to put down the controller and watch the frenzy of dazzling attacks kill me. Because of the fleshed out graphics and the voice overs, CoM comes complete with a theater mode that strings all the cut scenes together into one large movie.

The main reason I cared about this game was that after you played through the game as Sora you get to play it over again as Riku, the villain/hero of KH1 who is also lost inside the castle. It’s interesting to see how the two plots are intertwined and how both characters choose to escape the castle, but the real reason I wanted to play as Riku was so I could use his dark powers to blow stuff up.

I can really only recommend this game if you like Kingdom Hearts. The story, the boring battles, and the poorly designed levels make this game really hard for the average gamer to enjoy, but if you’re a fan of Kingdom Hearts then this is a must buy because it’s fun to play as Riku and its cool to see the cutscenes fully rendered in 3-D. I’m not quite sure how to rate this game. As a GBA game CoM is easily a 4 out of 5 because the controls work better for the Game Boy and the game is much more challenging because you can’t side step every attacks. While the Playstation 2 game seems like a lazy attempt to update a good game with extras that feel tacked on. I would have to give Kingdom Hearts Re: Chain of Memories for the Playstation 2 a 3 out of 5.