Confessions of a Superhero

So it’s Halloween (Happy Halloween!) and I’ve been racking my brain about what I should write about on this special day where you can dress up like your favorite comic book or videogame character without looking like a total doof. It finally dawned on me to write a review of Mathew Ogens’ Confessions of a Superhero which shows the lives of four people who dress up like superheroes for a living. 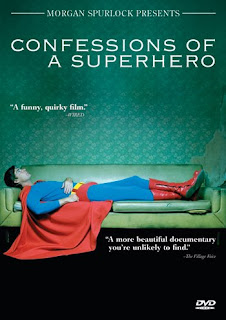 Confessions of a Superhero directed by Matthew Ogens show the lives of four actors who have come to Hollywood to make their acting dreams come true. Unfortunately life is tough and broken dreams can’t pay the rent. The four actors dawn the mantle of their favorite Superheroes and panhandle in front of the Grumman's Chinese Theatre on Hollywood Blvd.

The movie mainly focuses on the Christopher Dennis who seems to have been enveloped by the Superman lore and has lost touch with reality (seriously, it’s a little scary how far this man goes to become Superman). Next in line for screen time is Maxwell Allen who portrays Batman. Maxwell also has his share of problems such as his uncontrollable anger and a failing marriage. It doesn’t help that Maxwell’s constant exposure to Christopher seems to have altered his thinking. The last two actors Jennifer Grant as Wonder Woman and Joe McQueen as The Hulk are not featured as much as the other two, especially Joe who is only used to highlight points that the other actors have made. Both Jennifer and Joe understand that their alter egos are a temporary fix and are seen going to casting calls while Christopher and Maxwell roam the streets hoping for money.

The documentary shows how four individuals with similar dreams can vary in the execution of their goals. From the Fantastic claims of Christopher to the down to earth wisdom of Joe, each hero finds their own way in the world.

Nothing special here. You can hear everyone speaking just fine. Sadly, the background music isn’t memorable or existent in some of the scenes.

Not bad either. It has your standard documentary feel with still photographs of our heroes out on the streets thrown into the mix.

You mean the not so special features (ooooo I’m so witty). There were a lot of deleted scenes in the special features area, but when I started watching them I understood why they were cut….. they’re not interesting so don’t even bother with them.

So What Do I Say?

This was certainly not the whimsical movie I thought it would be when I was looking for movies to watch over the weekend. This was a serious film that took an in-depth look at human strife. At times the movie was frightening depressing because I could see a lot of myself in each of the characters, yet Ogens still adds some funny moments like Elmo getting arrested to keep the film's tone from being too melancholy. All in all I enjoyed the film and I’ll give the overall package a 3 I’ll Save the Days out of 5

Can Money Be Considered a $uper Power?

I’ve talked to many people about money as a superpower and for the most part people think I’m crazy. I hope my comparison of natural super abilities and extreme wealth show you how similar these “powers” are to each other. According to Wikipedia, (not the best source, I know) the term super power means a person who has normal human abilities, but at a level greater than any normal human, such as superhuman strength. It goes on to say that a character that derives their power from equipment, such as Batman, Green Arrow, and Iron Man do not have superpowers even though they are still considered superheroes. I want to challenge the idea that super powers only exist as extreme physical abilities, but that they can also exist when a person is in position of an extreme quality like wealth. 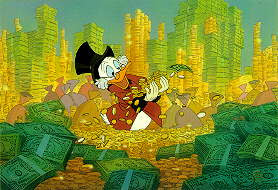 First let’s look at the word superhuman. According to dictionary.com the word superhuman means exceeding ordinary human power. What defines the Flash’s super speed ability isn’t that he runs fast, it’s that he runs 100 times fasters than an ordinary person. Arnold Schwarzenegger may have been strong back in the day, but his strength didn’t even compare to that of the Hulk. Now lets apply this idea of extremes to those super heroes without, “super powers.” Bruce Wayne has a lot of money, so much so that he can build high tech boats, jets, cars and large space stations without it phasing his wallet. Can most people say that? Of course they can’t, most people couldn’t even dream to attempt something like that. Bruce Wayne’s money gives him the characteristic of superhuman because he has superhuman wealth.

Next let’s look at how individuals gain superhuman abilities. One way is to inherit the ability from their parents or a family member from a previous generation. The best example of this would be marvel’s mutants. Both of Magneto’s children inherited mutant abilities from their father. In a broader sense of the word it’s possible to inherit a family’s fortune. Again, if we look at Bruce Wayne we see that after his parents died their money was passed down to him. Another way to gain a super power is to genetically alter ones DNA. A good example would be Peter Parker being bitten by a radioactive spider. It altered his DNA and gave him his spider abilities. Even though you may not be able to change your genes you can change your financial situation. Some of the more enthusiastic financial self help books would say you can make bucket loads of money by following your dreams. Even though it is uncommon hear rags to Richie Rich stories, it still happens. Just think of the guy who created facebook, he’s loaded now.

Finally, if you can see how money could be considered a super power just think about what it means for us in the real world. People like Bill Gates have the potential to save the world. Now I’m not saying that Mr. Gates isn’t doing his part to make the world a little bit better. I know he donates millions of dollars to various charities, but wouldn’t you fell a little bit safer knowing that some masked Bill Gates like character was making sure your neighborhood was safer at night?

So what do you think? Am I crazy or do I have a point? I would love to hear what you think.