It’s Hispanic Heritage Month so I’ve decided to round up some of Latin America’s best or maybe worst characters that have been featured in comics and on TV. 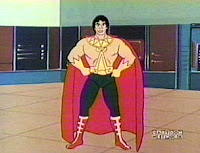 El Dorado - Yes, El Dorado was a racist stereotype of a Latin American man because of his broken English and yes, he was only used as a plot device to transport characters to far off locals and to neatly rap up episodes of the Super Friends, but he was one of the first Latin cartoon characters to appear on TV and that has to mean something...right? Blatant racism aside, El Dorado is a formidable opponent with super strength, teleportation, illusion casting, and flight. Oh, did I mention that he has no nipples...I feel like that's the greatest offense of all.

Bane -The man who broke Batman’s back was for years a prisoner in Santa Prisca where he basically became king of the prison yard by building up his body and his mind. FACT: Did you know that Bane’s mental prowess rivals that of Batman? Brain and brawn, now that’s a frightening combination. Bane uses Venom, an experimental drug, to enhance his already beastly physical stature giving him muscles that not even Sammy Sosa could hide. 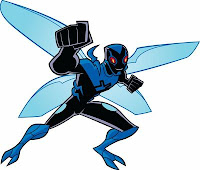 Blue Beetle -Ummmm well, my entire working knowledge of the Blue Beetle comes from the animated series Batman the Brave and the Bold and I really don’t know how accurately the series portrayed his origin. Jamie Reyes happened upon the Blue Beetle Scarab (advanced alien technology) which decided to force itself onto Jamie’s body. The reason for the hostile takeover of Jamie’s body is unknown, but Batman suggests that it was Jamie’s virtue that made him the right person to wield the scarab’s power. The scarab transforms itself into a super charged battle suit which can morph into various weapons likes swords and plasma guns.

Más y Menos - Oh the lovable super speedy twins from Guatemala top my chart. Más and Menos were first introduced in Cartoon Network’s Teen Titans as a pair of heroes who only spoke Spanish. I don't know what the twins were actually saying during show because none of the other characters could translate for them and the creators wisely decided not to include subtitles. Más and Menos not only broke the sound barrier, but they also cleverly broke the language barrier by way of their gestures and sometimes frantic action poses. To activate their power of super speed Más and Menos must be in physical contact with each other which makes their fighting style interesting to watch because of the many different ways they choose to move as a team.

There you have it, my 5 pics for Hispanic Heritage Month. I know there are a lot more Hispanic characters out there in the world, but these were the ones that really stood out to me. If you think someone else deserves to be on the list then jot them down in a comment.

Posted by Shookster at 8:31 AM