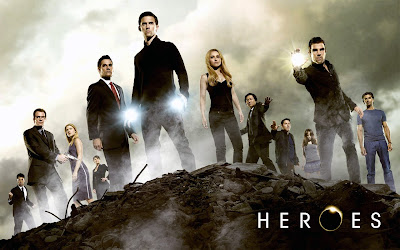 So Heroes premiered on Monday and I completely missed it. What was I doing with my time? I was watching House...I know bad nerd, but begrudgingly I must admit I made the better decision with House. Now I’m not saying that Heroes was bad, it was fine, I’m just saying it wasn’t anything special. The fourth season kicked off with Claire going to college and trying to be a normal kid, Hiro desperately trying to achieve hero status again, a mysterious new character named Samuel, and of course the ever looming return of Sylar. The show introduced a handful of characters, but the only one worth mentioning is Samuel and even after the the two hour premiere all we know is that his power allows him to control ink and that he has some kind of scheme up his sleeve.

There were two things about the premiere that I had beef with.

What I’ve learned from watching Top Chef is that too many ingredients can ruin a dish, but if you can stick to some classic flavors you wont be in the bottom three. If Heroes really wants to stay on top it should stick to basics by adding depth to its characters and writing plots that have a meaningful impact on the story as a whole.

Posted by Shookster at 8:21 AM