Batman the Brave and the Bold 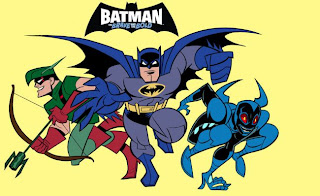 How did this happen? How is it possible that I let a new Batman series get past me? Batman the Brave and the Bold (ummm can they maybe work on that title a little bit more) premiered on Cartoon Network a couple of weeks ago. Batman the Brave and the Bold is a retro reincarnation of the Dark Knight with an art style similar to the 60’s version Batman (Adam West would be proud). The TV series is based on the DC Comics team up series with the main focus being on Batman. According to Wikipedia, the creators decided to have Batman team up with the lesser known characters like the Blue Beetle (who?), Plastic Man (lame!), and Aquaman (now that’s just upsetting), but Wikipedia never explained why they decided to use characters from the superhero B team. (On a side note, the Flash will appear on the show…when did the Flash become a B list hero???? Isn’t he one of the original founders of the JLA? Come on people show the Flash some love.)


I’ve only seen one episode, but here are my general thoughts. The music at first is great. It has an old school jazz vibe and one hell of saxophone taking the lead. Unfortunately, halfway through the episode you’ll realize that there is only one, maybe two background songs for the entire episode. Meaning, the same intense crazy saxophone music plays when Batman beats up the bad guys or when he walks through a door. It gets old fast. The writing is good, I didn’t want yell at the TV because the writers decided to throw in a lot of corny jokes or use ridiculous plot lines. OK I'll admit the plot was a litte out there, but it made for an interesting episode. The animation is fun. It’s not serious, but it’s not too cartoony which goes well the retro feel of the show. 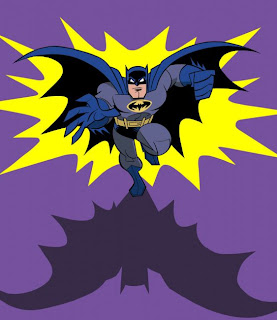 As for the characterization of Batman, he is one big stick in the mud. Honestly, he is not very interesting and doesn’t have a lot of depth. Do good and fight evil, that’s all there is to this Batman. No sarcasm, no troubled past, no workaholism, nothing but do good and fight evil (very disappointing). Despite Batman being dull the sidekicks do provide entertainment. Plastic Man was a relatively deep character with some interesting qualities, but I still don’t care about him. I get the feeling that this show isn’t really about Batman, but about the no names he teams up with. My theory is that the creators tried to pitch a similar show with their favorite obscure characters, but had their ideas rejected because nobody cares about a team of B squad superheroes. When the creators put Batman in the title, the network big wigs couldn’t resist producing Batman the Brave and the Bold because they knew kids would watch anything with Batman in it.

If you don’t take the series too seriously you’ll find yourself really enjoying it. I don’t know what direction the series will ultimately go in, but I’m excited to find out. Batman the Brave and the Beautiful (oops I meant Bold) airs on Cartoon Network Fridays at 7pm central.