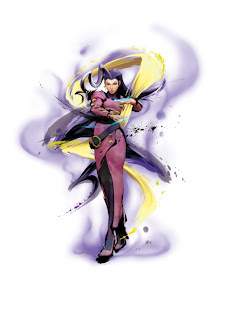 It was announced Friday the 19th that Rose would be the latest addition to Street Fighter IV. The lovely Rose first made her appearance in Street Fighter Alpha and uses her scarf as a deadly weapon. You can look forward to playing as Rose and the other Street Fighters favorites on February 17th on the PS3 and the X-Box 360.

Posted by Shookster at 9:06 AM