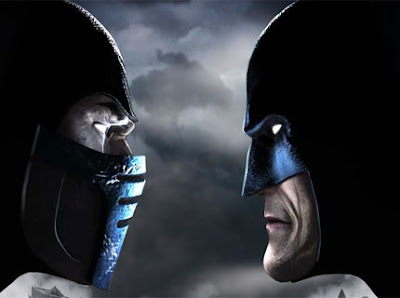 Since I don’t have an Xbox 360 or a shiny PS3 I can’t legitimately write reviews for certain upcoming games. What I can do is rant or rave about future games based on trailers that I’ve watched and the reviews I’ve read. From what I’ve gathered Mortal Kombat vs. DC Universe is a little uneven. If you look at the roster you will see classic mortal combat characters like Liu Kang, Raiden, and Sub-zero taking the stage with DC greats like Superman, Batman, and Wonder Woman. The problem I see with this game is that the DC characters have better attacks than their Mortal Kombat counterparts.


Can’t We All Just Get Along?

The big controversy of the summer was if the DC heroes would have fatalities for which the Mortal Kombat franchise is known for. The answer was a no, but the DC heroes would perform Heroic Brutalities meaning that the good guys wouldn’t kill their enemies, just rough them up a bit. If you check out this clip from gametrailers.com you’ll notice that some of the Heroic Brutalities are a little more dangerous than a simple knock out.

Did you see Superman hammering Jax into the ground or Green Lantern crushing Raiden? Jax and Raiden are either dead or will never walk again, what kind of superhero does that? As you may have noticed, some of the finishing moves are awesome while others are extremely lame. What’s up with Batman’s Heroic Brutality? Would a cold blooded killer really be that scared of bats?. Luckily, each character has two finishing moves.

Am I a Broken Character?

Superman has ice breath, laser eyes, and limited flying capabilities, what can you do Sonya? What! You can only kick, too bad for you then. The Joker can teleport (when did he learn that) and has several long and short ranged attracts and if you play the Flash properly he’s just a blur on the screen. Oh and did I mention Lex Luther is in the game. What’s Lex going to do, throw money at his opponents hoping to buy a victory?

This has been more of rant, but even though the game has its issues I still want to play it. From the looks of the reviews and previews Mortal Kombat vs. DC Universe is an above average game. I’m sure I’ll buy the game once it makes its way to the bargain bin, until then I can only dream of giving superman a virtual back hand to the face.

Posted by Shookster at 8:16 PM