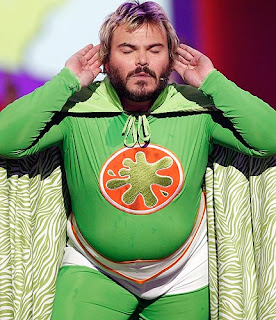 Jack Black hosted this year’s Video Game Awards and I must say he was hilarious if not a little too raunchy, but it’s Spike TV what do you expect. The Award show included performances by 50 cent, All American Rejects, Weezer, and LL Cool J with a bevy of stars presenting awards.


Best Shooter: Gears of War 2 (is anyone surprised)

Gamer God: Will Wright (I think they really wanted to give Will an award so they made up a category just for him. Will Wright is responsible for games like the Sims and Spore)

Big Name in the Game Male: Kiefer Sutherland as Sgt. Roebuck in Call of Duty

Best Performance by a Human Female (I have no idea what this category is about): Debi Mae West as Meryl Silverburgh in Metal Gear Solid 4: Guns of the Patriots

Best Game Based on a Movie or TV show: Legos Indiana Jones: The Original Adventure

Congratulations Grand Theft Auto IV you won the tiara and the bouquet of roses. Take your bow and enjoy your time in the spotlight but be careful, there are a handful of crazed beauty queen-esque video games ready to knock you off your throne.

Posted by Shookster at 9:10 AM