I’ve wanted to write this review for two weeks now, but unfortunately due to several factors such as work, lack of internet, and me being incredibly cheap I haven’t gotten the chance to watch the movie until now. Let me explain my frugality. I recently discovered that my public library has as massive DVD collection which means free movies (hurray!). Unfortunately it also means everyone else has access to these free movies. I’ve been having trouble getting the movie because of people who swooped in and rented the movie before I got off work. Also, for whatever reason my library doesn’t believe in holding movies so I’ve been stalking this movie for about a week. But the joke is on me because the Hulk is now overdue negating the whole point of renting it from the library. 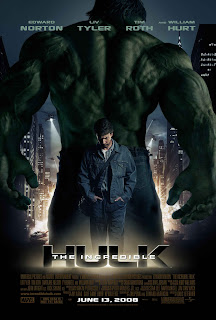 Even though this is a DVD review (because I’m assuming that a lot of people have already watched the Hulk, but haven’t bought the DVD) I must admit that I hadn’t seen the movie until I rented it. As comic book movies go this was pretty good. What kept me from scrambling to see the Hulk in the theaters was my terrible memory of the first Hulk movie in 2003. A better telling of the love story between Bruce and Betty Ross and the creator’s choice to humanize the green behemoth made this movie a lot easier to watch. There is enough fan service to keep the nerds entertained like the Captain America reference and an appearance by Lou Ferrigno, yet enough story to pull new fans to the Hulk. I’ll admit that before I watched this movie I didn’t like the Hulk, but now that I’ve seen the movie I’ve been reading the Hulk’s Wikipedia page and I’m excited to see what direction the next movie will go in.

Audio
The audio is good. The background music was crisp and did not seem to overpower the movie. Also, the music wasn’t overly repetitive and complemented the scenes very nicely.

Video
Picture was sharp and the Hulk didn’t look like a computer-generated image (CGI) mess when he was interacting with non CGI elements. Some of the visual effects are cool like bullet time in the fight scenes, but it’s been done before. At least the director didn’t use the special effects like a gimmick to hide the movie’s flaws.

Special Features
The Hulk is a two disc DVD with most of the special features on the second bonus disc. The main reason I wanted to do a DVD review was because I thought the alternate opening would give a new twist to the movie. I was wrong. It’s really short and not that interesting, but that isn’t to say the other features aren’t good. With special features like audio commentary from the cast and crew, anatomy of a Hulk Out, deleted scenes, and comic book vignettes there’s certainly some good extra content.

So what do I say?
I really liked the movie. I got a lot of complaints that Bruce’s back story wasn’t fleshed out, but I argue that he doesn’t have a complicated origin story. Bruce falls in love with Betty Ross; accidently turns himself into the Hulk; the Hulk rampages through the city, that’s about it. What I didn’t like was the characterization of Betty Ross. Now I don’t know if it was poor acting on Liv Tyler’s part or if it was the writers who decided to water down the character, but I just found her annoying in some of the scenes. On the same note I found Tim Blake Nelson acting terrible. He played the super excitable Dr. Samuel Sterns and I couldn’t wait for him to get off the screen. The other actors: Edward Norton (the peaceful Bruce Banner), Tim Roth (the psychotic villain Emil Blonsky), and William Hurt (the stubborn General Ross) played their roles perfectly.

I’m giving the Incredible Hulk a 4 Hulk Smash out of 5. 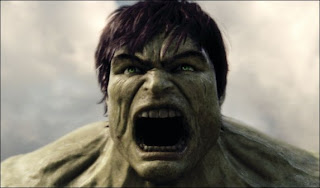