The Learning and Gaming Expo in Park Ridge last Saturday has come and gone and I have to say it was pretty pitiful. It was held in Maine South’s cafeteria with speakers on one side of the room and a sparse collection of games to be played on the other. So was it worth attending?


Where are the Games?

I would have to say yes. The purpose of the Gaming and Learning Expo was to inform people (mostly parents) about the gaming industry and dispel some of negative propaganda of the gaming world. The Expo advertised that there would be games, but I was disappointed (but not surprised) to find that the games they showed off to parents and non-gamers were the super G rated games. The only games to make an appearance at the Expo were DDR, Guitar Hero 2, Rock Band, Mario Kart, Wii fit, and Little Big Planets. Since the Expo was an attempt to show parents how games can be used for the forces of good and not medium for watching people’s heads explode I guess I can be OK with their selection of games. It was weird that they were raffling off games like Stranglehold and Street Fighter 4 to the kiddies as prizes (seems a little counter intuitive to me). 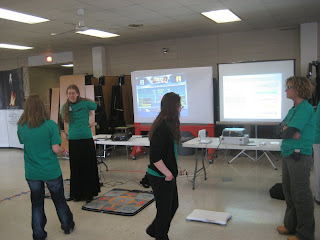 So what saved the Expo from being a huge failure? The speakers of course. I got to talk to a couple really cool game designers and animators. Michael Henson a professor at DeVry University’s Game and Simulation Program spoke about animation in games. “Animation in gaming is painstakingly slow, you need to be very detail oriented to do this job.” Have no fear you Ritalin addicted junkies, Michel went on to say, “There are many other types of designers such as level designers, character designers, and people who just make sure the shadows look good in a game.” Apparently, level and character designers don’t need to go into the same meticulous detail as an animator does. 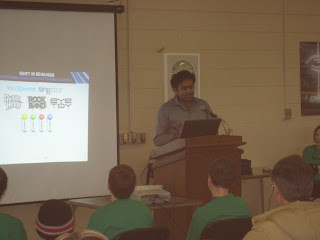 Other speakers included Simeon Peebler from Chicago’s Flashpoint Academy who gave a talk on how to get into the gaming industry. No surprise that one of the best ways to break into the industry was to join Flashpoint Academy. I did learn that Flashpoint is rapidly growing and it has just bought one of ABC’s studios in Chicago to house some of their larger projects. Not bad considering Flashpoint Academy came into existed in 2007. Kishna Kumar from Microsoft was a big proponent that video games were very useful in todays society. He talked about how the gaming industry is larger than the music and movie industry and showed what kind of potential games in the future can have on children. Unfortunately, I couldn’t stay to listen to his entire talk because I had to get back to work.

I don’t know how to judge if this event was successful or not. There weren’t that many people actually at the Expo and I would say that half the people attending were staff and volunteers who were there to set up and take down. The games they had on display were lame, but the speakers they found were top notch. I wish more people had come to the Expo, but overall I guess I’ll give the Learning and Gaming Expo a passing grade. I expect something a little bit bigger next year. Did you hear me Park Ridge?

Posted by Shookster at 9:28 PM