I'm sure you've heard it too. Action Comics No. 1 issue featuring Superman on the cover was just sold for $317,200 wow thats pretty impressive for comic that was originally priced at 35 cents. John Dolmayan, drummer for System of a Down purchased the comic book in behalf of an undisclosed client. Apparently there are only 100 copies of Action Comics No. 1 floating around the world. I get that the comic is rare and I'm sure it will be amazing in his collection, but we're in the middle of a recession who has 317,200 dollars to spend on a faded comic? I hope someone uses that money for something useful. 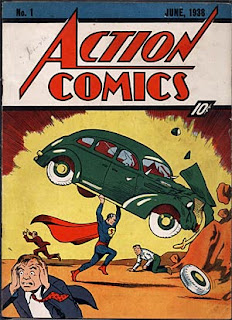 Posted by Shookster at 7:28 PM