Whoever likes music raise your hand. If you’re not raising your hand (and I know if you’re not) put them into the air immediately. OK you can put your hands down now. For all of you who did raise their hand (or those who just caved into peer pressure) you should be excited to hear that Video Games Live (VGL) is coming to Chicago on November 15th at the Chicago Theater.

What exactly is VGL you ask? VGL is a spectacular concert that features music from popular video games such as Super Mario, Halo, Final Fantasy, Pac-Man, Legend of Zelda and several other popular game titles. The concert is played by a live professional symphony orchestra and is accompanied by a first-class choir. Not only are your ears in for a treat, but so are your eyes. VGL features a dazzling light show with video footage projected onto a large screen behind the orchestra. The official VGL website said this about the experience, “It's the power & emotion of a symphony orchestra mixed with the excitement and energy of a rock concert and the technology and interactivity of a video game all completely synchronized to amazing cutting edge video screen visuals, state-of-the-art lighting and special on-stage interactive segments with the audience.” VGL was created by Tommy Tallarico (who some of you might know from G4’s Judgment day and Electric Playground) and Jack Wall, two very well known video game composers. Tommy and Jack created VGL for the purpose of showing how video games can function as an art form in today's culture. 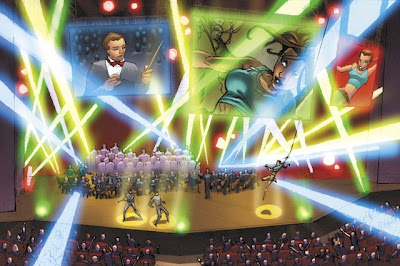 To sweeten the package, VGL also includes Pre and Post show events. At the Pre-Show there will be a costume contest as well as video game competitions for games like Guitar Hero II and Space Invaders. At the Post Show there is a meet-and-greet with various video game composers and of course more video games to play. Tommy and Jack did their best to make this an entertaining experience for gamers and non-gamers alike.

Even though I’m FREAKING excited for the event some of you may not be convinced yet. I can only imagine you’re in one of two groups. Group A, or as I would like to call it “Group Skeptic,” doesn't understand why anyone would want to listen to game music outside of the video game. Or Group B, which I will call “Where’s the Guitar Solo so I can Head Bang, Throw Up the Horns, and Rock Out in the Mosh Pit.” Those in group B believe orchestra music isn’t for them and want nothing to do with a string instrument that isn’t plugged into an amp. For both groups I present the orchestral version of Simple and Clean from Kingdom Hearts (another one of my favorite video games).

Anyone excited yet? I know I am and that was just a small taste of what VGL has to offer. If that song didn’t interest you in the slightest bit then I don’t know why you’re still reading this post. If you liked what you heard then you certainly want to go to VGL. If you’re not in the Chicago area don’t worry VGL travels all over the world. Check out the official Video Games Live site to see when it comes to a city near you.

Despite the fact that I want to go VGL so bad that it hurts, I will not be attending the event this year. Through an unfortunate twist of fate I will be out of town when VGL rolls into Chicago (I am literally crying about this…seriously), but I encourage everyone to go. This is definitely one event you don’t want to miss.

Posted by Shookster at 8:04 AM