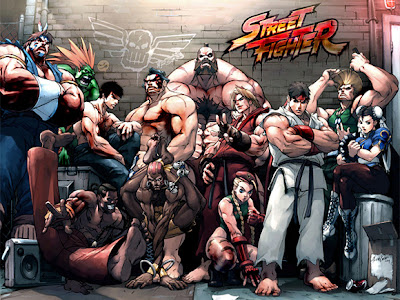 Wahoo! I have New Super Street Fighter IV trailers hot off the press....everyone get pumped! What, these trailers are over a month old...Yeah I know, I’m a little (very) late with these, but whatever, I just found them, and I’m super excited, and I’m going to talk about them anyways. The game features 10 new characters that are a mix of Super Street fighter II, the Alpha Series, and Final Fight characters with a couple of newbies thrown into the mix. Our ten new characters for Super Street Fighter IV are:
New

T. Hawk
Dee Jay
Adon
Cody
Guy
Dudley
Ibuki
Makoto
Super New
Hakan
Juri
I can't wait to play as Ibuki, the teenage girl ninja who just wants a normal life. While I’ve never played as Ibuki before, I do have an affinity to ninjas, I mean, who wouldn’t want to throw shuriken, run up walls, and well, be awesome! One newcomer that’s getting a lot of buzz is the brand new character Hakan, a Turkish Oil wrestler. As you will see in the second video, the giant and very red skinned man, can bathe himself in oil and perform some very well....ummm, awkward and perhaps suggestive attacks that will send characters flying across the screen. I’m counting the days until I get to revel in all of Super Street Fighter IV’s glory.
Come fight me online if you dare, me and my PS3 will be waiting for you.
A trailer to get you pumped

Posted by Shookster at 2:59 PM