Can’t We All Just Get Along? A look at New Super Mario Wii

“Why would you pick me up and throw me into a piranha plant!” Yep that’s my experience playing the New Super Mario Bros. Wii for the Wii. I had heard a lot of great things about the game so I was over joyed when I got a chance to play it with my friends. Then we started playing and all that glorious joy went away. 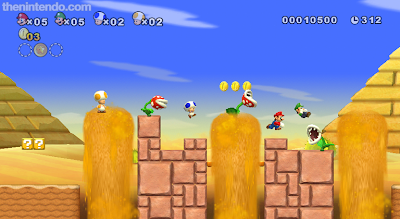 Lets start with what the game does well and that’s basically everything except for the multiplayer. The graphics look great with its old school Mario feel mixed with semi 3D worlds. The music also brings Mario’s world to life with remixes of it’s classic themes like Bowser’s castle, underwater world, and starman. What really surprised me is that Nintendo dropped the Wii motion nonsense to make game feel as retro as possible.

Now lets move to the bad news. As a single player experience New Super mario Bros. Wii is an enjoyable time that’s a Delorean ride back to the good old days of Super Mario Bros. 3, but as multiplayer extravaganza it’s a pain in the neck. As previously mentioned it’s not hard for players to accidently (or purposely) throw you at the deadly enemies who have no remorse for taking one of your lives. 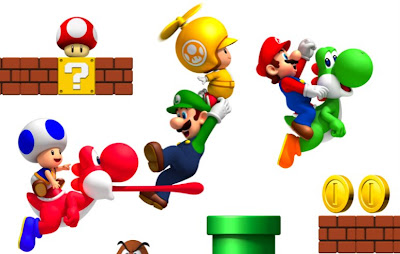 With more than two players cluttering the screen it’s also very easy to trip over each other. If you run too fast you’ll collide with one of you teammates then stop dead in your tracks. This is bad because you were probably running away from something and now the both of you have been squished. If you go too slow, the screen will scroll away without you and you’ll have to give up a life to continue.

The most frustrating aspect of the game was trying to jump when others were around. The idea to allow someone else jump higher by jumping on top of another character’s head is a great idea on paper, but when you’re both jumping over lava pits there is no doubt one of you will be pushed towards a fiery doom while the other lands safely on the other side. The other con to jumping is when a player dies. When anyone dies the screen freezes for a spit second to rub in the fact that that someone has died. No big deal unless you were getting ready to jump, then you’re guaranteed to press the jump button too early and miss the ledge by inches causing another split second freeze and potentially another death. 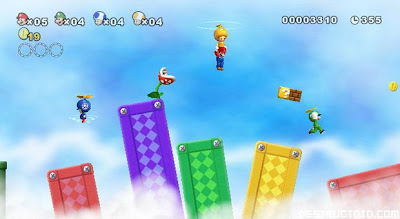 As a single player game New Super Mario Bros. Wii is a challenging and fun experience, but as a four player game the challenge becomes a game of delicate precision or instant death. I’ve focused on a few of the negatives, but don’t let a few minor problems keep you from getting this game. This is a very solid game despite some of its hiccups. If you’re still worried about needless game deaths and fights over why you had to be sacrificed for the good of the team then maybe you shouldn’t tell you friends about your shinny new Christmas present. New Super Mario World Wii gets 4 It’s a me, Mario out of 5.

Posted by Shookster at 9:00 AM