We were all worried that Disney was going to make Marvel into a cutesy sugar coated company where bad ass characters like the Hulk and Iron Man would skip through through fields of flowers; but none of us ever imagined that Marvel’s grittiness would rub off on Disney. It seems like Disney’s lovable mascot is getting a makeover for his his new game Epic Mickey set to be released sometime in 2010 for the Wii. Now when I say gritty I really mean a game that’s not blasting you with over the top cuteness just regular adorableness. 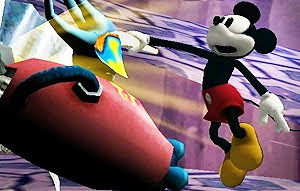 The plot of the game goes something like this: Mickey is kidnapped and brought to a demented world called Cartoon Wasteland where all of Disney’s cartoon rejects who couldn’t cut it as icons were banished to live their lives out in obscurity. Armed with a paint brush and paint thinner Mickey must battle his was through Cartoon Wasteland and unravel its mysteries. Like a lot of games today, Epic Mickey comes complete with a moral system. You can choose to be the hero and help the denizens of Cartoon Wasteland or (and this is were it gets kind of stupid) not help them at all and become a loner. That’s right you don’t even get the option of being bad, you just get the option of being a jerky good guy. 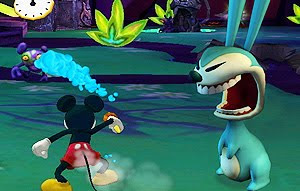 This is where I would normally rip into a game for believing that slightly tweaking an established character will appeal to a more hardcore audience. Instead, I will have to forgo my mockery until the game is released. The reason for this is because Spector, the creator of Deus Ex and Thief, is in charge of the game. Both Deus Ex and Thief are good games so I officially have mixed feelings. On the one hand the premise of a darker Mickey feels gimmicky, but on the other hand, I know that the developers who are in charge of this game are top notch. If Spector can pull off making Mickey “edgy” or at the very least shift people’s perception of the delightful spokesperson for that evil corporation...ehm I mean whimsical company, then I would be more than willing to give the game a try.

Posted by Shookster at 8:22 AM