A well known on air personality is mysteriously murdered and the only way to find the killer is to travel between dimensions before the killer strikes again. It’s up to you, your gang of angsty friends, and talking stuffed animal bear to save the day. Does it sound like an outrageous plot? Yes. Is it a lot of fun to see how it all unfolds? A resounding HELL YA! Persona 4 for the PS2 is another good reason not toss out your old game system. 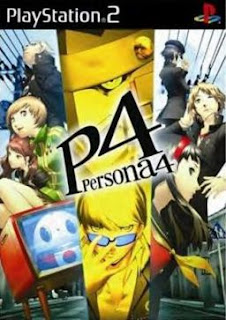 Persona 4 is an RPG and I know what some of you are thinking, “RPGs aren’t my thing, give me a gun and some Fallout 3”. But the game isn’t all about the turn based fighting; it’s about making relationships with the people around you. Ok yeah, it still sounds lame but keep reading. The game features something called the Social Link System. Think of it kind of like a Sims game. You walk around making friends and deciding what to do for the day. You can hang out with the cute girl down the hall or go to soccer practice with your teammates. The more time you spend with each character the stronger your relationship becomes and as a result the game will let you watch some hilarious or heart breaking cut scenes with the people you chose to spend time with. Some of the people you will encounter include: a female pop star, a sexy nurse, and a fox (yes like the animal, it took me by surprise too). 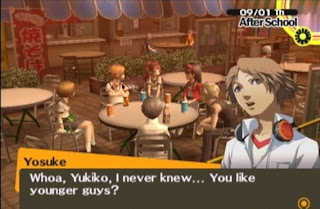 Seems easy enough right…. wrong. It seems that once you get the hang off the Social Link System everyone wants to be your friend and you have to budget your time and figure out who you want to spend time with. On top off that you need to study, work multiple jobs, and still find time to dungeon crawl in the alternate world. When you add the fact that there are time restrictions such as you can only talk to one person a day or that you have roughly two weeks to rescue victims from being murdered, the game turns into a balancing act which can be quite overwhelming at times. 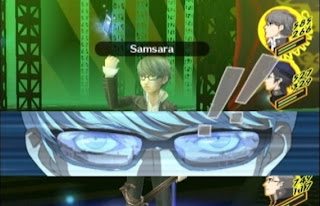 The Social Link System also has another feature. The stronger your bonds with people in the real world the stronger your personas become. Right, let me explain what a persona is. When you travel to the alternate reality via a TV you are given monsters called personas to help you in battle. You, as the main character, are special because you can hold multiple personas while your teammates will only have one (sucks for them). If you think about it, Personas are like Poke´mon of the soul and you have to find and create new persona if you want to make it through the game. There are 200+ personas that you can create; unfortunately, you can only carry a max of 12 into battle 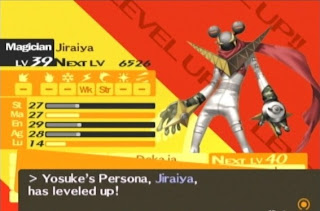 Your exploits in the real world take place in a small rural Japanese town complete with a high school, a shopping district, and Walmart-esque mega store threatening to put all the small businesses out of business. On the flip side the alternate reality is rather trippy. Unlike Persona 3 where the characters had to climb 263 floors of the same old level design, you now go through bite sized dungeons with their own themes like a haunted castle, a sauna, and a strip club….what!(blush). The ascetics are beautiful and the boss battles are symbolic of whats happening in the rest of the game. 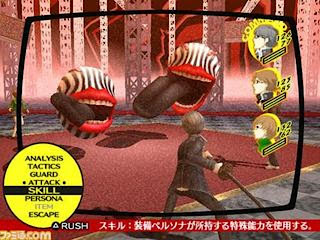 The game's music rocks my socks off. Each level has its own unique soundtrack and some tunes are extremely catchy. The game comes with a CD with 24 tracks and you better believe that I’ve been listening to it non-stop while I drive to work.

This game is great. There are many more things I could say about the game like the improvements over Persona 3 which include smarter A.I. or the fact that you can now take direct control of your teammates, but this post would be unbearably long and no one wants to hear me ramble (seriously, I won’t stop). I think the best thing I could say is check the game out for yourself and see firsthand just how weird and wonderful the game is. I’m giving Persona 4 (drum roll please) 5 split personalities out of 5

Posted by Shookster at 6:01 AM